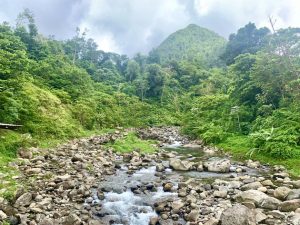 River and mountain in the interior of Dominica. IPBES’ collaboration with the private sector funds research and evidence that helps businesses make better-informed decisions to protect biodiversity. Credit: JAK/IPS

By Alison Kentish
DOMINICA, Jul 1 2022 – In the twin crises of climate change and biodiversity loss, the changing climate often eclipses the loss of ecosystems and species in funding and awareness.

For years, the Intergovernmental Platform on Biodiversity and Ecosystem Services (IPBES) has been one of the world’s most visible forces for policy and action, informed by science, to protect and restore nature.

IPBES is also now making headway in its goal of ensuring that biodiversity issues receive a similar level of priority and awareness to that of the climate crisis – as well as increased funding. An important part of this involves diversifying its funding sources to include the private sector and philanthropic organisations.

“There is a dual purpose in the way we have engaged with the private sector over the last few years, both to find opportunities for their support and to engage them more closely with our work and its outcomes, so that they can use those in their own activities as well,” IPBES Head of Communications Rob Spaull told IPS.

To protect the objectivity and credibility of the Platform’s scientific research, formal collaboration with private sector companies follows a rigorous due diligence process that can take up to one year and is spearheaded by a legal team from the United Nations Environment Programme, which hosts the IPBES secretariat.

“We ensure that any kind of contribution that might be received from the private sector has no influence on the science that IPBES publishes. It was really important for our member States that we implement a model that protects the independence of the Platform,” Spaull said. “We accept contributions, but those contributions go into the IPBES Trust Fund.”

IPBES says the science is clear – businesses can be a vital part of the solution to the biodiversity crisis.

“More and more businesses are understanding how biodiversity is strongly interlinked with their core business, as companies rely on nature for resources, and they are recognising how important it is for them, both for ethical and economic reasons, to progressively incorporate biodiversity into their strategies and business models.”

IPBES has produced some of the world’s leading and most cited scientific reports, including the 2019 Global Assessment Report, which concluded that one million species of plants and animals face extinction, while human activity has significantly altered 75 percent of the earth’s land surface and over 60 percent of the ocean area.

For Spaull, IPBES’ budget pales in comparison to the Platform’s value, which includes the many years of voluntary expert contributions to every IPBES report.

“For example, on the Global Assessment Report, we did a bit of a back-of-the-envelope calculation and added up the different person-hours that were contributed free of charge by the experts over the three years that they worked on the report. It added up to more than 17 years of work, which was essentially a voluntary expert contribution to the Platform. The operating budget doesn’t actually reflect the immense value that is created by the Platform.”

These recent private sector collaborations are a solid foundation for IPBES’ funding diversification but represent a small fraction of what is needed for greater financial stability.

“They are a good start, but they are still a start. That is one of the reasons why we are looking forward to the future where hopefully, we will be able to expand into new sectors with other kinds of private sector and philanthropic organisations in a similar way,” said Spaull.

IPBES is already working on a number of new reports. Two highly anticipated assessments will be released in July, after four years of work, one on the Sustainable Use of Wild Species, and one on the Diverse Values and Valuation of Nature.

IPBES will publish another report next year on invasive alien species and their control and is already working on one about reaching simultaneously sustainable development goals related to biodiversity, water, food and health, as well as one on transformative change. A new business and biodiversity assessment is also planned that will assist businesses with assessing their impacts and dependence on biodiversity.

“The IPBES assessments enjoy strong global recognition and visibility,” Gueorguiev said. “As populations of plants and animals are shrinking and nature’s contributions to people diminish, individuals and providers of funds will make consumption and investment choices that will exclude those companies whose activities contribute to the decline of biodiversity. Public-private partnerships and collaborations are one of the solutions to both the biodiversity crisis and the climate crisis,” said Gueorguiev.

“Biodiversity is set to become a social issue as unavoidable as climate change, and we are working with companies with strong sustainability leadership in their industries, which can enable them to set sustainability standards,” she said.