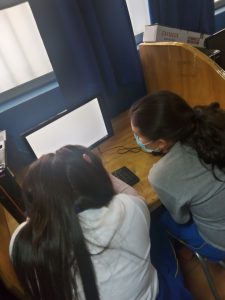 Children at the San José Obrero School use the primary school’s computer lab. At their homes in the municipality of Peñalolén, to the east of Santiago de Chile, many do not have computers because 90 percent of them come from poor families. CREDIT: Courtesy of San José Obrero

By Orlando Milesi
SANTIAGO, Jul 1 2022 – A Chilean government plan seeks to ensure connectivity in remote areas, in a first step to address a deep digital divide among the country’s inhabitants that includes a lack of access to technology and digital education deficits, exposed by the COVID-19 pandemic.

In 2020, during the social isolation at the height of the pandemic, 76 percent of children in higher income segments had their own computer, laptop or tablet and 23 percent had access to a shared one.

But in the lowest income segments, only 45 percent of children had their own computer or laptop, while 16 percent had none. The rest managed to get access to a shared computer or tablet.

There are also notable differences according to the type and location of schools.

One school that illustrates the gap

“People here don’t have computers, although it may seem strange,” said Cecilia Pérez, principal of the San José Obrero School in Peñalolén. “Computers are just a dream for many. Nor do they have their own connection, or wi-fi. They have cell phones with prepaid minutes or very cheap plans that do not give them a good enough connection to support a lesson.”

In a conversation with IPS at the school, she said “this is a disadvantage that has nothing to do with the children’s desire to study, their intelligence, or their worried families. It is something external that is difficult to solve.”

To illustrate, Pérez said that “if homework is posted on the platform, it is very hard for children to read it and do it from their cell phones.”

Her school is in a poor neighborhood located at the end of Las Parcelas Avenue, in the Andes foothills of Santiago, the capital. Most of the first to eighth grade students come to school on foot. 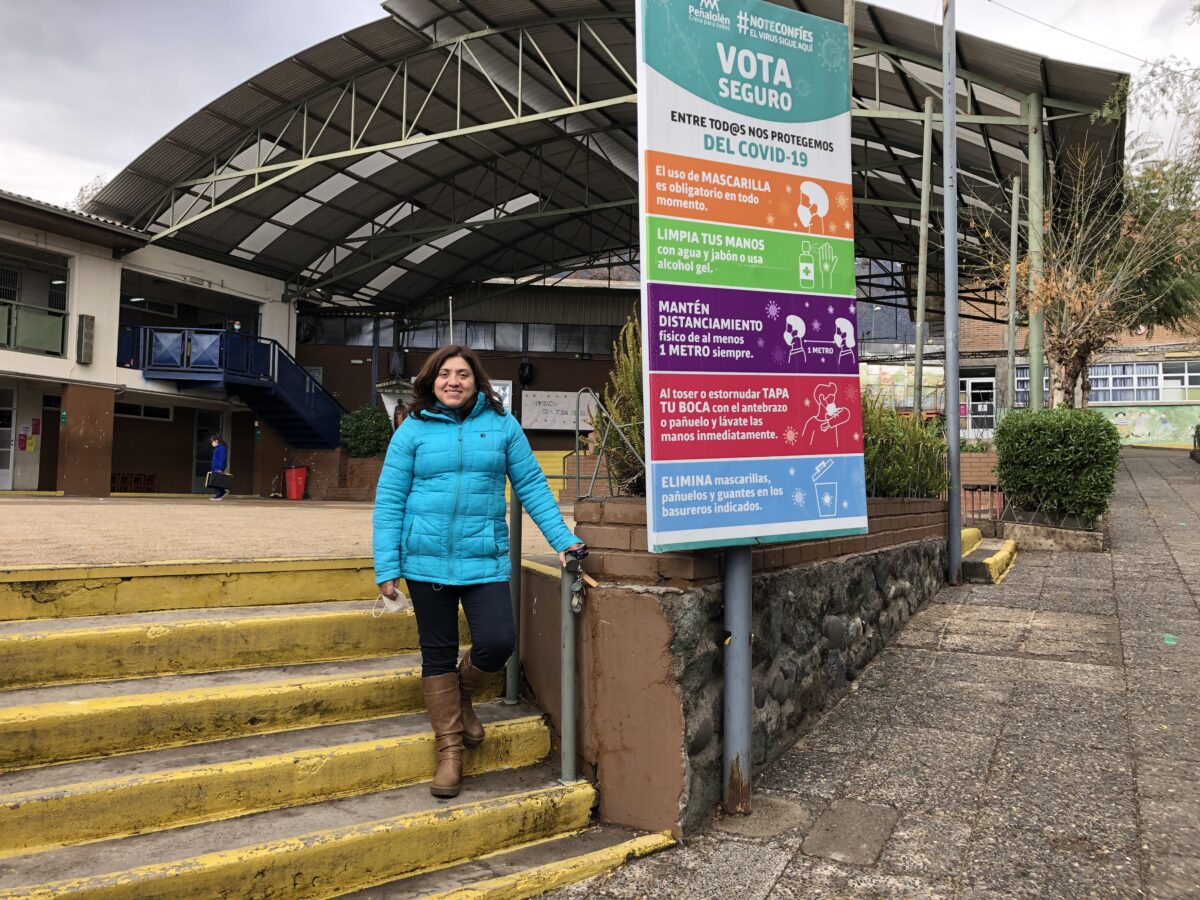 At the San José Obrero School in the municipality of Peñalolén, in the foothills surrounding the Chilean capital, 90 percent of the students come from poor families, with parents who work as street vendors, cleaners or similar trades. Parental support for homework is almost non-existent, says the principal of the primary school, Cecilia Pérez. CREDIT: Orlando Milesi/IPS

This public primary school in the municipality of Peñalolén, which serves 427 students, is an example of the connectivity problems faced by students in the most deprived urban and rural areas.

In this South American country of 19 million people, there are 3.6 million primary and secondary students. Two million students are enrolled in the first to eighth grades (six to 13 years of age) and the rest are in secondary school (13 to 17 years of age).

“We have third grade students today who started first grade in 2020, at the height of the pandemic, when they had to learn to read and write. These children had only gone to kindergarten and are now coming to class in the third grade with a very significant delay,” she said, referring to the effects of distance learning during the pandemic.

Because of this, Pérez said, “we had to set priorities in the curriculum and reinforce language and math which are super important to continue learning.”

She added that another serious problem is that many of their students experience situations of domestic violence. “Their emotional and social support is the school, and when they couldn’t be with their classmates, they lost two years of socializing,” she said.

“We have children between the fifth and eighth grades who have experienced a lot of violence, a lot of individualism, a lot of sexualization that never happened before. Partly because there is no parental control over cell phones at home,” she said.

An additional problem is connectivity because in Peñalolén “there are many hills and in some parts the internet does not work. There are families who returned the ‘router’ (a device that receives and sends data on computer networks) that we lent them because the signal does not reach their homes.” 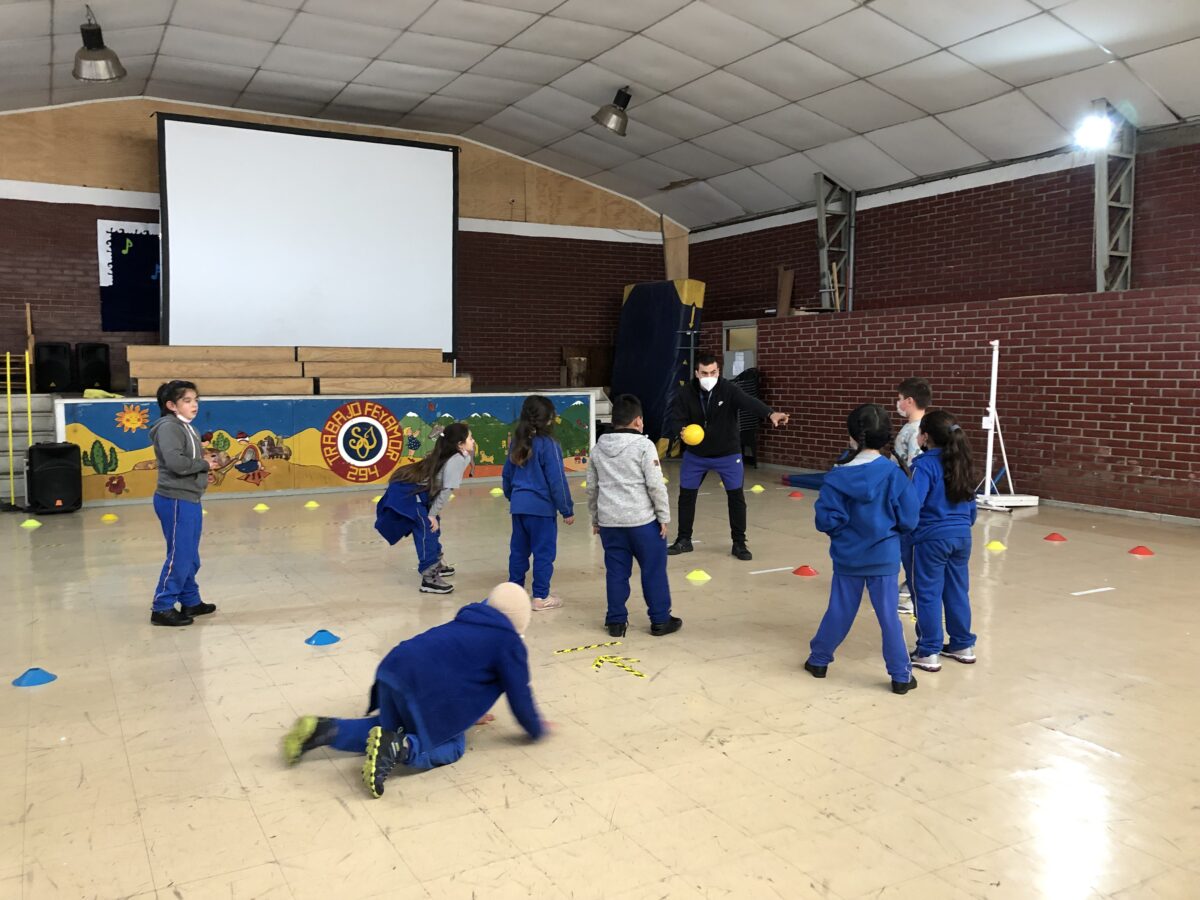 Older children at the San José Obrero School in the municipality of Peñalolén, near Santiago de Chile, stay two hours longer at the school, doing sports and other activities as part of their education. In this way they avoid excessive leisure time and a lack of supervision at home, which can be dangerous for them. CREDIT: Orlando Milesi/IPS

The deep digital divide among Chileans is aggravated by the difficulties in accessing the internet in isolated villages, rural localities and also in poor urban neighborhoods where telecommunication companies do not provide service or where criminals steal the cables.

“Inequality in our country is also manifested in internet access,” said leftist President Gabriel Boric, in office since March. “Thousands of students were unable to exercise their right to education during the pandemic due to a lack of connectivity.”

To address this situation, he said in a recent communiqué, “our Zero Digital Divide Plan will ensure, by 2025, that all the country’s inhabitants have access to connectivity.”

“This requires a sustained effort to continue with current initiatives such as the Internet as a Basic Service Bill and the generation of new projects that will allow us to reach isolated and rural areas,” he said.

As an example, Boric mentioned the town of Porvenir, which a month ago became the southernmost part of this long narrow South American country with access to the 5G network.

The 36-year-old president won the elections in the wake of the huge 2019 protests, in which one of the demands was to end the social inequality gap, one of the largest in the world according to international organizations, and where more equitable access to education was one of the main points.

Paulina Romero, a first-year chemistry and pharmacy university student, became a symbol of the digital divide that Boric seeks to eliminate, when two years ago images of her climbing onto the roof of her house in the small community of San Ramón, in the southern region of La Araucanía, in a dangerous attempt to find a signal to be able to do her assigned homework, went viral. 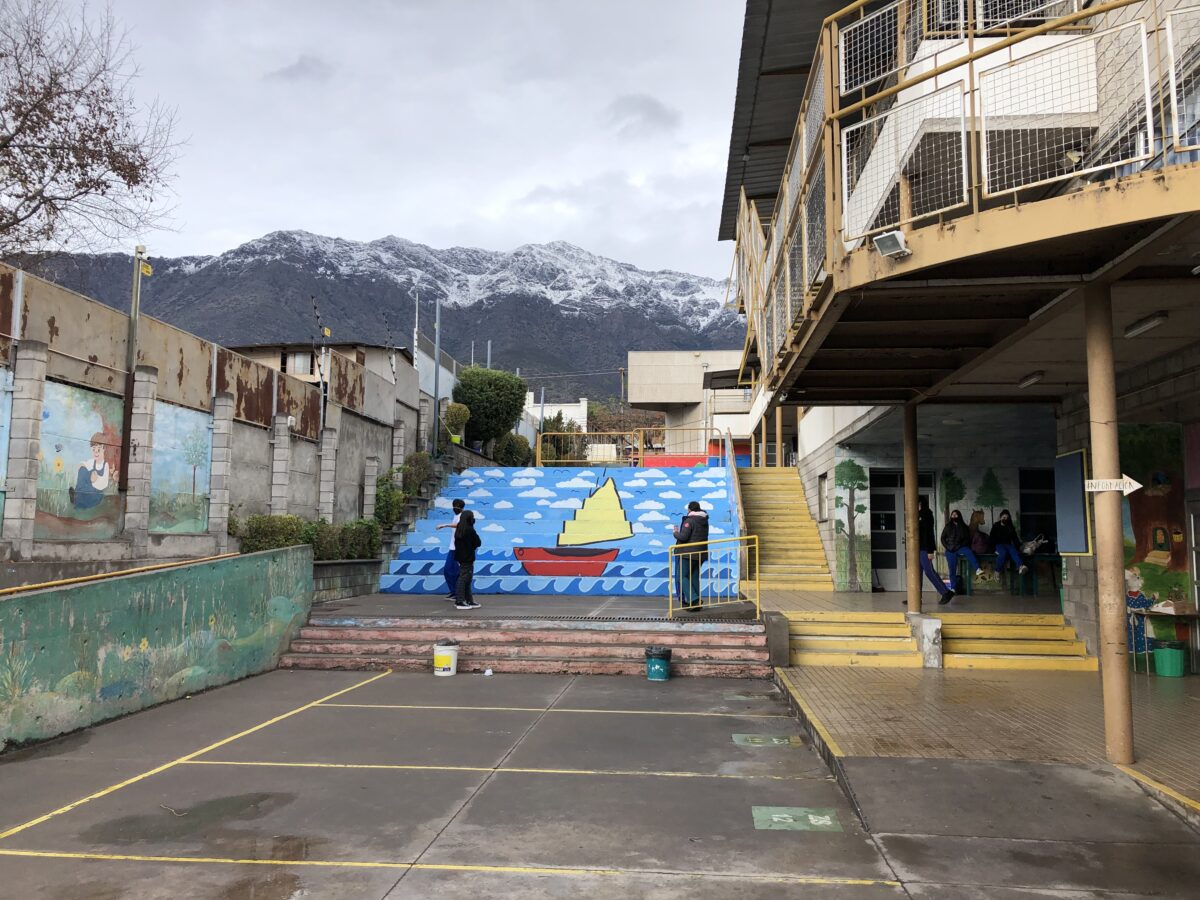 A colorful mural decorates the staircase leading to the second story of classrooms at the primary school in Peñalolén, located in the snowy Andes foothills seen here in the background in the middle of Chile’s southern hemisphere winter. CREDIT: Orlando Milesi/IPS

Plans to close the gap

Claudio Araya, undersecretary of telecommunications, told IPS that all efforts are focused on improving connectivity.

“A bill was approved in Congress a month ago that guarantees internet access for students,” he said. He pointed out that in part this access already exists but it is not operational for schoolchildren, because “many students in areas with coverage had problems with distance learning because their families could not afford cell phone plans.”

Araya added that a project is being implemented to ensure that all public schools, whether run by municipalities or the State, as well as subsidized private schools, have coverage for remote areas and connection speed.

“One part of the project is being completed now, by August, for 8,300 schools, a second part with 500 more by March 2023, and a third with a call for bids before 2023, which will cover just over a thousand schools,” he explained.

His office has also allocated resources for a new project, called “last mile”, which seeks to bring connectivity to isolated or rural areas. “We have already invested some 200 million dollars and we are contemplating an additional 150 million dollars to provide service coverage to the communities,” he said. 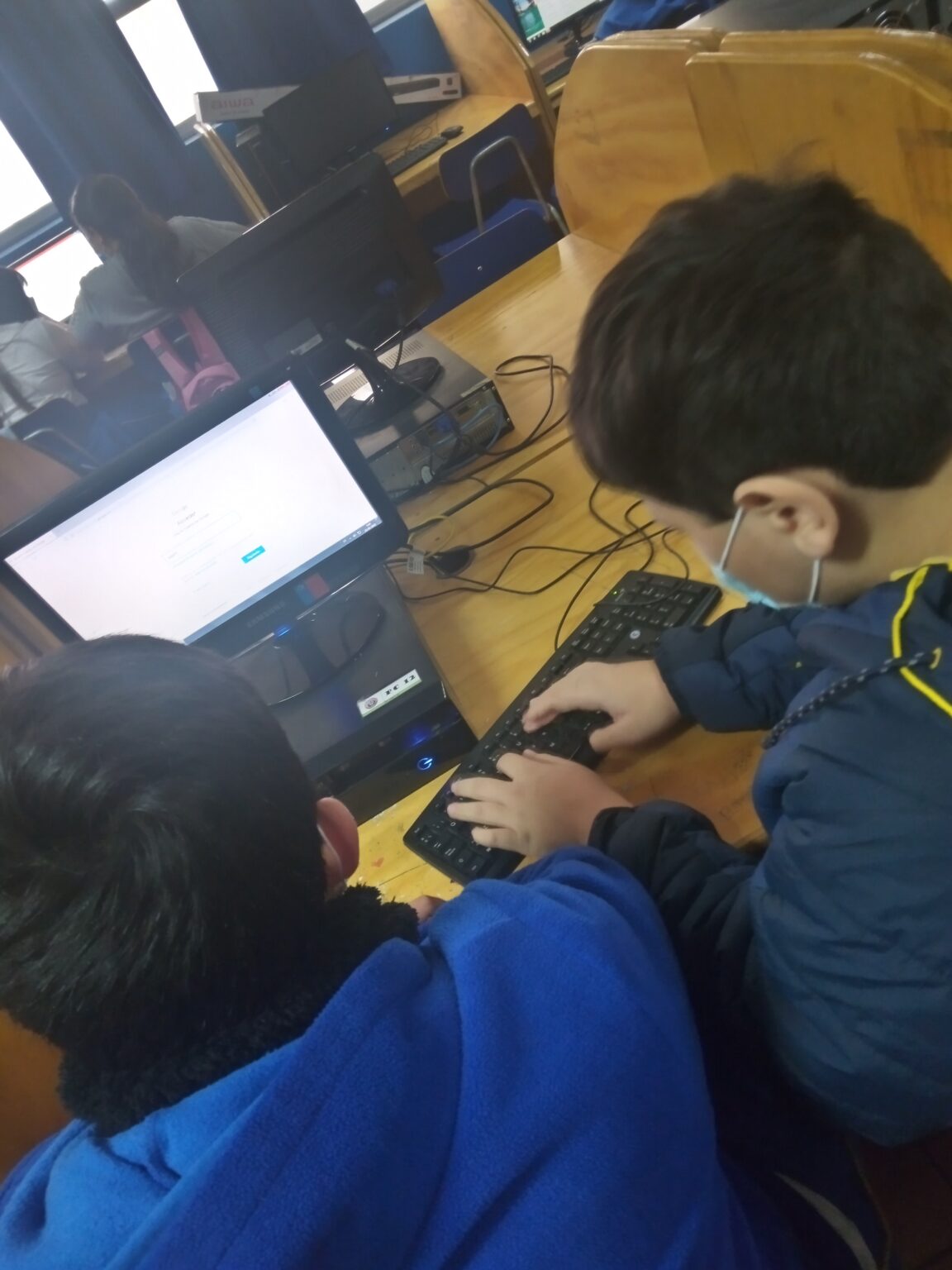 Another school stumbling over connectivity issues

Connectivity is the main problem for the 73 students at the school in the small town of Samo Alto, in the Andes foothills area of the municipality of Rio Hurtado, 440 kilometers north of Santiago.

“We are educating 21st century children with 20th century resources and technology,” Omar Santander, principal of the primary school, told IPS by telephone.

“The connection to the global world does not exist. You turn on a computer, log on to the network and all the other computers disconnect. It is impossible to work online. We have computers and tablets, but there they are, and they can only be used with resources and programs downloaded ad hoc,” he said.

The students cannot communicate and “these are gaps that keep us from providing greater opportunities,” he said.

“The lack of computers is the smaller problem. We have achieved internet efficiency and we have the equipment. The big problem is connectivity,” Santander stressed, adding that an antenna they made to capture the signal was not enough.

He said that “last year when we held hybrid classes, half at home and half at school, one day we tried to connect and it was a terrible disappointment.

“There is a wealth of information, of pedagogical resources available to students that unfortunately we don’t have access to,” Santander complained.

The principal explained that “everything that has to do with access to resources that enrich reading, writing, calculus and mathematics is there and we cannot make use of it.” 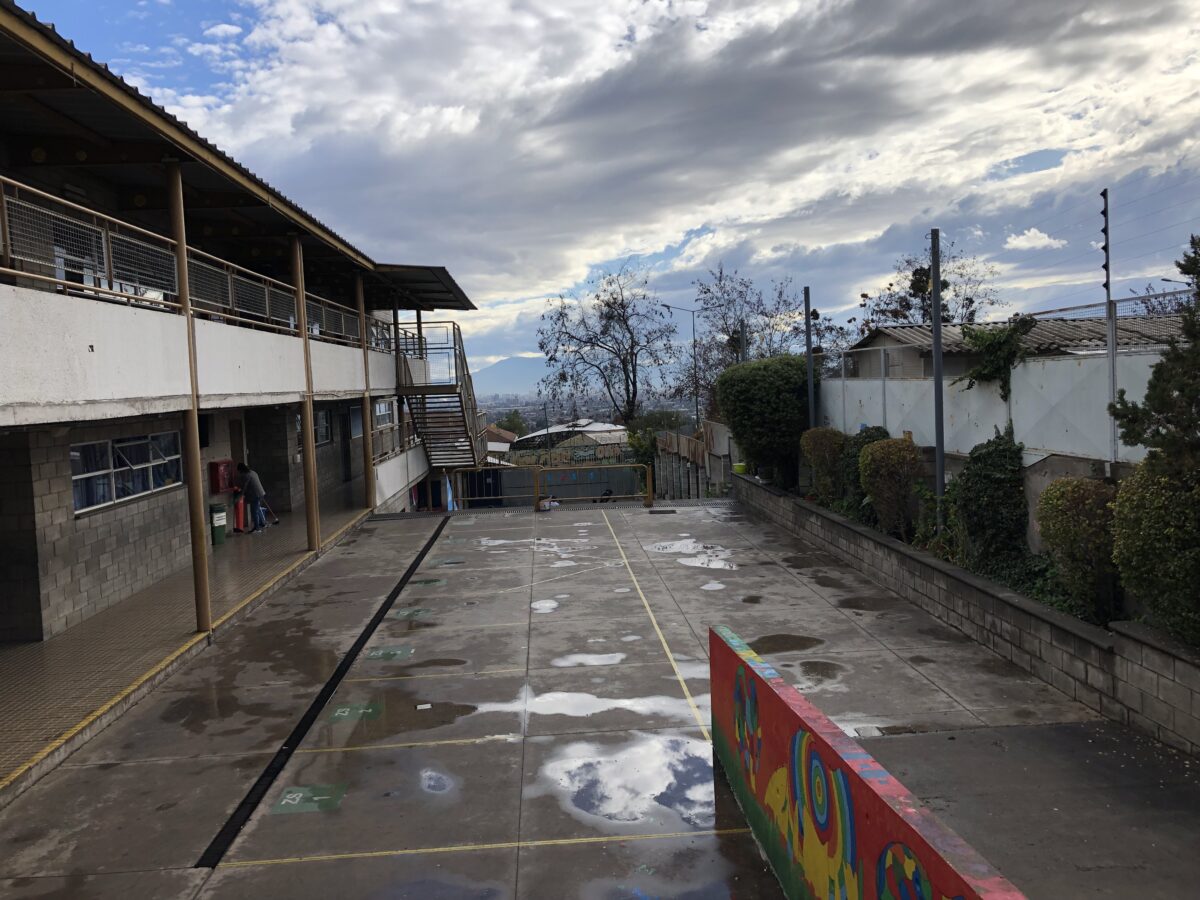 From the San José Obrero School, Santiago de Chile can be seen in the background, under a cloudy sunset after a recent rain on the first day of the southern hemisphere winter in Chile. CREDIT: Orlando Milesi/IPS

Luciano Ahumada, head of the School of Informatics and Telecommunications at the Diego Portales University, said that “reducing the digital divide goes far beyond having an internet plan.”

“It also involves promoting the use and daily impact of information and communications technologies (ICTs) to maximize people’s well-being. It is a much more complex and time-consuming challenge than access,” he told IPS.

In his view, “we must work on access, but also on economic, ethnic and gender barriers and establish a framework concept of cybersecurity or basic concepts in the population to live in a healthy way in this new world.

“There is an economic gap, an age gap, an ethnic gap, which in different countries has become very evident,” he said.

Ahumada said that “access is just the starting-point. It is a good initiative, necessary to massify internet access, but we must think about massification of high-speed connections because with networks of the past we cannot carry out actions of the future and establish the basis for an information society.”