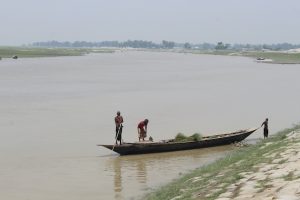 Farmers in Bangladesh would welcome an early warning system that does not rely on smartphones. Authorities and devising an SMS service after devastating floods killed many people and destroyed harvests. Credit: Rafiqul Islam/IPS

By Rafiqul Islam
DHAKA, Aug 1 2022 – Ziaur Rahman, a farmer of Pakuar Char under Sariakandi Upazila in Bogura, cultivated jute on a newly emerged river island (char) in the Brahmaputra River, but this year’s flood washed away his crop.

“Flood is very common in the char areas during the monsoon. Despite that, I sowed jute seeds on the char. This year, the flood hit our locality too early, damaging my jute field,” he said.

Ziaur said his jute field was almost mature and could have been harvested within a couple of weeks, but the sudden deluge damaged it.

“I did not get flood forecast in time, and that was why I failed to harvest jutes, incurring a heavy loss this year,” he said.

Like Zillur, many farmers lost their crops to the devastating flood that swept Bangladesh’s northeast and northwestern regions in June this year.

According to Bangladesh Agriculture Minister Dr Abdur Razzaque, floods damaged Aus (a type of rice) paddies of around 56,000 hectares across the country this year.

The Flood Forecasting and Warning Centre (FFWC) under Bangladesh Water Development Board (BWDB) issues daily flood bulletins and warnings, but the people living in remote and vulnerable areas hardly benefit because they do not have the proper technology.

Under the digital flood forecasting and warning system introduced in 2021, the FFWC issues flood warnings to the people living in flood-prone areas through ‘Google push notifications’ three days to three hours before a flood hits.

To receive flood warnings, people need an android mobile phone. The notifications are sent to these devices through a Google alert between three days and three hours before the onset of a flood, depending on the system’s predictive capacity.

BWDB, in collaboration with tech-giant Google and Bangladesh Red Crescent Society, developed the system, which is now functional in the 55 districts of the country.

Sarder Udoy Raihan, an FFWC sub-divisional engineer, said the BWBD has available data on floods and sends those to Google.

While this system has been helpful, many people living in remote chars and flood-prone areas do not have access to smartphones and the internet, so they don’t receive digital flood warnings.

The BWDB, a2i, Google, International Red Cross and Red Crescent Societies have already started a collaboration to reach the flood warnings and information at the doorsteps of the people living in the country’s flood-prone areas through toll-free mobile SMS service. This will enable them to take measures to protect their properties before a flood hits.

“Introduction of the SMS flood alert service depends on the BTRC as there is an issue of cost involvement,” he said, hoping that the BWDB would be able to launch the SMS service in the next season.

Once the toll-free SMS service is introduced, mobile phone users living in flood zones will be identified using their cellphone tower ping, and SMS will be sent to them containing information on the rise or fall of river water level, severity of flood and details of the nearest shelter.

Raihan said it would be possible to send around 36 million SMS per year through mobile phone operators if flood warnings could be sent to people through SMS.

Sardar Mohammad Shah-Newaz, a former director of Flood Division at Dhaka-based think tank, Institute of Water Modelling (IWM), said if the flood forecast were not appropriately disseminated to those living in flood-prone areas, it wouldn’t help.

“Almost all people of the country use mobile phones. If the flood warnings could reach the people living in flood-prone zones through toll-free mobile SMS, they would be able to take precautionary measures to save their properties and minimise their loss and damage to this end,” he said.

Suggesting automation of the flood forecasting system in Bangladesh, Shah-Newaz said the BWDB could introduce the SMS service, and it should launch the service as soon as possible.

Deluge is a common phenomenon in Bangladesh. During every monsoon, flood hits different parts of the country, causing a huge loss of lives and assets.

Due to heavy precipitation upstream in India’s northeast states, Bangladesh experienced devastating floods in its northwestern districts and Sylhet division, leaving millions of people stranded and triggering a humanitarian crisis.

According to the Directorate General of Health Services (DGHS), the death toll from this year’s floods has reached 123 in the country. The total deaths were recorded from May 17 to July 17 in 2022.

Of the total deceased, 69 people died in Sylhet, while 41 in Mymensingh, 12 in Rangpur and one in Dhaka.

VIENNA, Austria, Aug. 01, 2022 (GLOBE NEWSWIRE) — The AOP Health Group (AOP Health) is a European pioneer for integrated therapies for rare diseases and in critical care headquartered in Vienna, Austria. The company focuses on research, development and global sales of innovative treatment solutions and specializes in therapies for rare diseases and intensive care. In early July, AOP Health signed an agreement with Leukos Biotech, a spin–off company founded by the Barcelona–based Josep Carreras Leukaemia Research Institute. The agreement signed by AOP Health covers the option for developments of the newly discovered chemical substance within any treatable indication, not limited to oncological or rare diseases.

At first, AOP Health will focus on the development of treatment options for Acute Myeloid Leukemia (AML) and Myelodysplastic Syndrome (MDS). Both are special disease types of leukemia that often start in the bone marrow. Agnes Kohl, Chief Business Officer of AOP Orphan Pharmaceuticals GmbH, Member of the AOP Health Group explains: "Based on positive data, our plan is to expand the development for further orphan indications even outside of AML and MDS at a later stage. With this agreement, we may be able to broaden the portfolio within our therapeutic areas offering even more treatment options for patients."

Development in cooperation with Leukos

As AOP Health focuses on rare, hemato–oncological cancers and has many years of experience in the development and commercialization of hemato–oncological treatments, the company will drive the further development of the substance in cooperation with Leukos based on a new mode of action. This could potentially turn into a milestone in the treatment of many blood cancer and other cancer patients. Luis Ruiz–Avila, Chief Executive Officer of Leukos Biotech: "We focus on developing new treatments for a wide variety of tumors. We were born to transform excellent science from the Josep Carreras Leukaemia Research Institute into valuable products for cancer patients in need, and this agreement is a very significant step in that direction. We are convinced that AOP Health is the right partner to turn this promising, novel mechanism of action into a clinical reality for the benefit of patients in a wide variety of unmet medical needs".

The AOP Health Group incorporates several companies including AOP Orphan Pharmaceuticals GmbH with its seat in Vienna, Austria ("AOP Health"). The AOP Health Group is the European pioneer for integrated therapies for rare diseases and in critical care. Over the past 25 years, the Group has become an established provider of integrated therapy solutions operating from its headquarters in Vienna, its subsidiaries and representative offices throughout Europe and the Middle East, as well as through partners worldwide. This development has been made possible by a continually high level of investment in research and development on the one hand and a highly consistent and pragmatic orientation towards the needs of all its stakeholders on the other "" especially the patients and their families as well as also the healthcare professionals treating them.

Leukos Biotech, SL (Leukos) is a spin–off company from the Josep Carreras Leukaemia Research Institute incorporated in Barcelona in 2015. The company is developing new treatments and diagnostic tools for a wide variety of tumors targeting the serotonin receptor HTR1B, which antitumoral potential was first described and patented by Leukos' founder Dr. Ruth Risueo in her laboratory at the Josep Carreras Research Institute. Leukos' main financial support is from private and institutional investors. The main shareholders are Inveready, CDTI Innvierte and the Josep Carreras Foundation. Besides investors' support, Leukos has received non–dilutive grants and loans from the Catalan Government, the Spanish Government and the European Union in various programs.

About the Josep Carreras Foundation

The Josep Carreras Leukaemia Foundation was established in 1988 with the intention of contributing to finding a definitive cure for this disease. Its efforts are concentrated on four basic areas: administering the Spanish Bone Marrow Donor Registry (REDMO), scientific research, carried out by the Josep Carreras Leukaemia Research Institute, patient guidance through an online patient consultation channel, and reception apartments for patients who need to undergo treatment and have to spend a long time far from home.

The Josep Carreras Leukaemia Research Institute, a public centre pertaining to the Generalitat de Catalunya's CERCA network, was established in 2010 with the aim of furthering biomedical research and personalised medicine in the field of leukaemia and other onco–hematological diseases. It is the first research centre in Europe exclusively focussed on leukaemia and malignant blood diseases, and one of the very few in the world. The Josep Carreras Institutes has three coordinated but independent scientific campuses: University of Barcelona Hospital Clnic Campus, The Catalan Institute of Oncology/Germans Trias i Pujol Campus, and the Sant Pau – Autonomous University of Barcelona (UAB) Campus

Inveready is a leading alternative asset manager in Spain – investing in early–stage VC, growth VC, venture debt, strategic equity in listed companies, infrastructure and private equity – providing financing solutions to companies throughout their life–cycle. Founded in 2008, Inveready counts on 200 active companies, and more than 1bn of assets under management. Inveready has been investing in companies in the Life Sciences sector since 2008. Notable investments in this vertical are Atrys Health (listed on the Spanish market), EDESA Biotech (listed on Nasdaq), AVX Pharma (sold to Aerie Biotech) and PaloBiofarma (licensing agreement with Novartis). Inveready is headquartered in San Sebastian, and has other offices in Barcelona and Madrid. It has been recognized on multiple occasions by ASCRI and Preqin for the return on its funds and transactions (For more information, visit www.inveready.com).

Photos accompanying this announcement are available at 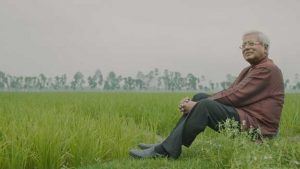 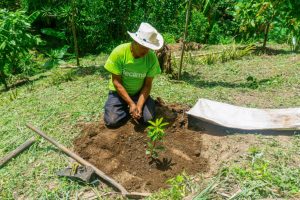