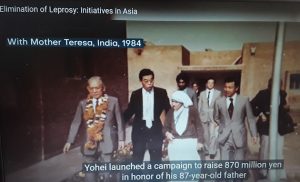 WHO Goodwill Ambassador for Leprosy Elimination Yohei Sasakawa with Mother Theresa of Calcutta in the early years of a campaign to eliminate leprosy and eradicate stigma from those affected by it. Sasakawa has turned this into his life’s work and, speaking at a webinar in support of the ‘Don’t Forget Leprosy’ campaign recalled how people affected by leprosy continue to be marginalized. Credit: Joyce Chimbi

By Joyce Chimbi
Nairobi, Kenya, Mar 25 2022 – On a visit to Indonesia’s Papua Province, WHO Goodwill Ambassador for Leprosy Elimination Yohei Sasakawa had dinner with a man forced from his village and living alone because he was affected by leprosy.

Over the years, Sasakawa saw many other desperate and desolate people infected and affected by leprosy. Marginalized, shunned, stigmatized, feared, and relegated to society’s furthest and hidden corners.

“Until I became ambassador, persons affected by leprosy tended to be on the receiving end of assistance. But I felt this was not the solution because this was contributing to self-stigma. I felt it was important for the public to know that they had been cured of their disease and were active,” Sasakawa, also the Nippon Foundation Chairman, says.

“I wanted to speak out, even though they had suffered from severe discrimination for a long time and were afraid that if they spoke up, they would be targeted afresh.”

Sasakawa spoke of his belief that persons affected by leprosy should take the lead in eliminating prejudice and discrimination and of partnerships with NGOs, academic institutions, and many other efforts to eliminate leprosy.

Sasakawa was speaking in support of the ‘Don’t Forget Leprosy’ campaign webinar series by the Sasakawa Leprosy Initiative under the theme, ‘Elimination of Leprosy: Initiatives in Asia.’

Under the Sasakawa Leprosy Initiative, the WHO Goodwill Ambassador, the Nippon Foundation, and Sasakawa Health Foundation work in coordination to achieve a leprosy-free world.

“The ‘Don’t Forget Leprosy’ campaign is significant. COVID-19 took attention away from other diseases, including leprosy. Leprosy continues to be a challenge. We must stay on the mission to detect, treat and eliminate leprosy,” Tarun Das, chairman of Sasakawa India Leprosy Foundation (S-ILF), told participants.

Sasakawa recounted Asia’s journey towards the long-term vision of zero leprosy, zero infection, disease, zero disability, and zero stigma and discrimination. Sasakawa spoke of the many challenges encountered along the way, the triumphs, and the journey into a leprosy-free world.

Triumphs include availability and provision of effective leprosy treatment and particularly the critical role played by the Nippon Foundation in reducing the number of patients with leprosy by ensuring Multiple Drug Therapy (MDT) treatment was available and free to all persons affected by leprosy. 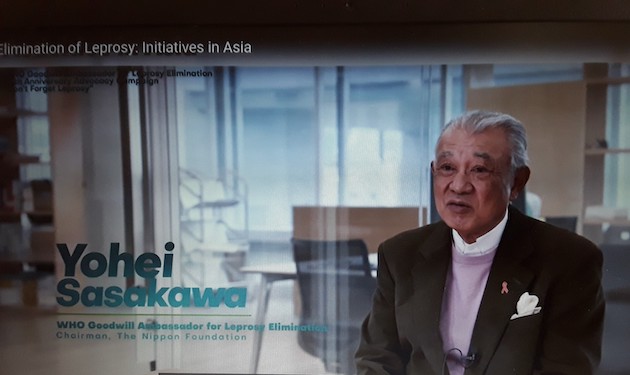 WHO Goodwill Ambassador Yohei Sasakawa speaking during a webinar on ongoing initiatives in Asia to eliminate leprosy. Credit: Joyce Chimbi

Sasakawa also told participants about the Dalai Lama Sasakawa Scholarship with matching funding from the Nippon Foundation in support of children from families affected by leprosy.

“It has not been an easy journey,” he said, but the answer for Sasakawa to solve these challenges is: “We will not know until we try.”

Dr David Pahan, the country director of Lepra Bangladesh, spoke about leprosy as a neglected tropical disease and is least prioritized by the health system.

“In response, we provided advice and emergency assistance to people affected by leprosy or acute disability in households threatened by the COVID-19 outbreak in Bangladesh,” Pahan told participants.

Pahan stressed the need for early treatment to prevent the risk of disability and encouraged collaboration with Civil Society Organizations to help fight stigma and improve leprosy treatment outcomes.

Erei Rimon, the National Leprosy Elimination Program Manager, Ministry of Health and Medical Services, Republic of Kiribati, spoke about the small island nation in the Central Pacific Ocean with an estimated total population of 119,490. Registered leprosy prevalence per a population of 10,000 is 12.9 percent.

Rimon reported ongoing efforts, such as the capacity building of health staff to detect and manage leprosy and follow-up of leprosy treatment defaulters, leading to a notable reduction from 241 defaulters in January 2021 to 162 defaulters in December 2021.

Das lauded ongoing collaborations, saying that Asia deserves special attention, especially South-East Asia, an endemic leprosy region. Asia is one of six WHO regions, where 127,558 new leprosy cases were detected in 2020 across 139 countries, including India, Nepal, and Bangladesh – 8,629 of these were children below 15.

Despite COVID-19 disrupting programme implementation and a reduction in new leprosy case detection by 37 percent in 2020 compared to 2019, Asia and, in particular South-East Asia, reported an estimated 84,818 cases out of an overall 127,558 cases.

Against this backdrop, Das told participants that S-ILF is dedicated to the socio-economic integration of people affected by leprosy to pull them out of demeaning dependence and earn their livelihoods with dignity.

The participants in the webinar heard heart-wrenching testimony.

“My name is Maya Ranaware, treasurer of the Association of Persons Affected by Leprosy. I am a woman affected by leprosy and cured. (I have) faced and (am) facing leprosy-related challenges. I experienced the most painful stigma from family, loved ones, and society,” she told participants.

Ranaware’s views were echoed by Yuliati Gowa, Chair of the South Sulawesi branch of PerMaTa Indonesia, who decried myths and misconceptions around leprosy. Gowa cautioned that these levels of misinformation derail efforts towards a leprosy-free world.

Dr Takahiro Nanri, the Sasakawa Health Foundation executive director, moderated a question-and-answer session between the Goodwill Ambassador and participants. This provided an opportunity to explore whether it was possible to eliminate leprosy by 2030.

While this was a grand vision, Sasakawa said it helped keep the leprosy elimination movement on track.

Despite his relentless campaign to eliminate leprosy, Sasakawa says: “I still do not think I have done enough.”

For so long, he says, “leprosy was thought of as a divine punishment or hereditary or highly contagious. Until MDT transformed treatment, people had this negative image of leprosy that remained in their DNA. We have to do more to remove it.” 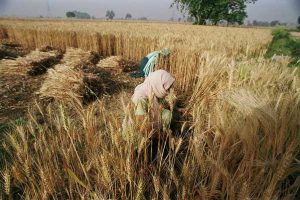 By Stephen Devereux
CAPE TOWN, South Africa, Mar 25 2022 – The situation in Ukraine is first and foremost a humanitarian crisis, and the food security and wellbeing of the people of Ukraine should be our immediate concern. However, because of the dominant roles of Russia and Ukraine in global food, fuel and fertiliser markets, there are also massive knock-on effects for people around the world. This is particularly true for the supply and cost of food. Here are three ways that the invasion of Ukraine leads to potential risks to food security in other countries.

Ukraine is known as the breadbasket of Europe, and Russia and Ukraine have both become major food exporters in recent years. In 2020 these two countries accounted for one third of the world’s wheat trade and one quarter of the world’s barley trade. Ukraine alone exported 15 percent of the world’s maize and half of all sunflower oil traded globally.

Two likely consequences of the ongoing crisis are reduced exports from Ukraine due to disrupted production and trade, and reduced exports from Russia, due to economic sanctions designed to harm the Russian economy. Commercial exports from major ports in Ukraine like Odessa have already been suspended. So there will be less wheat, maize, barley, and cooking oil available on world markets for the foreseeable future.

50 countries depend on Russia and Ukraine for 30 percent or more of their wheat. Many of these are low-income food deficit countries in North Africa, the Middle East and Asia – such as Bangladesh, Egypt, Nigeria, Sudan and Yemen, which is currently on the brink of famine.

Reduced food supplies will cause food prices to rise. This is in addition to the fact that food prices were already rising before Russia’s invasion of Ukraine. In February, the FAO Food Price Index reached a new all-time high, partly due to recovery in global demand post-COVID-19, and partly reflecting expectations of imminent disruptions to wheat and maize exports from Russia and Ukraine.

Rising oil, gas and petrol prices will drive food price inflation even further, since food and fuel price movements tend to track each other closely. Because poor households spend a higher proportion of their income on food, higher food prices will affect low-income consumers and low-income countries worst. Bread prices are already rising in countries around the world. In Iraq, poor communities already staged protests about food prices in early March following spikes in the prices of flour and cooking oil in local markets, which officials attributed to the conflict in Ukraine.

Russia is the largest global exporter of fertilisers and fertiliser ingredients such as potash, ammonia, urea, and natural gas for making nitrogen-based fertilisers. On 2 February, Russia suspended its exports of fertiliser, ostensibly to protect its farmers. Belarus is also a major exporter of potash fertiliser. On 2 March, the European Union sanctioned Belarus for supporting Russia’s invasion of Ukraine. These sanctions included a ban on all imports of potash from Belarus.

Dozens of countries depend heavily on imports of nitrogen and potassium fertiliser from Russia and Belarus. Many of these are low-income food deficit countries in West and Central Africa. But reduced fertiliser supplies and higher fertiliser prices will also impact negatively on middle-income and high-income countries that import large amounts of fertiliser, such as Brazil, India, the United States and much of Western Europe. Fertiliser prices in the United States have already jumped by 10 percent. Food production could therefore be compromised in many countries across the world.

How bad will it get?

Just how badly global food security will be affected depends on several things that are not yet known at this time. For now, we are left with several short and longer-term questions – many of which governments and global leaders should be considering as part of food security crisis preparation and response.

Secondly, how high will food and energy prices rise? For how long will the prices remain high? At what new baseline levels will they stabilise after the conflict?

Thirdly, how resilient are global and national food systems? A resilient food system has the capacity to sustainably provide sufficient, appropriate, safe, and accessible food to all people over time, even in the face of shocks and stressors. Can households and nations afford to pay higher prices for food and energy? How quickly can households and nations diversify away from Ukraine and Russia for food, energy, and fertiliser?

Finally, what actions will governments and international agencies take to mitigate the effects? Governments are already scrambling to reduce their dependence on imports from Russia, Ukraine and Belarus. What social protection measures will governments offer to affected farmers and consumers? Will countries aim for food self-sufficiency, and reduced dependence on fossil fuels and chemical fertilisers? This could be one positive side-effect.

We don’t yet know the answers to these and related questions. But one thing is certain: sadly, it will get worse for Ukraine and the world before it gets better.

The writer is Research Fellow at the UK-based Institute of Development Studies and member of its Food Equity Centre. 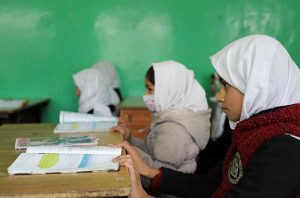 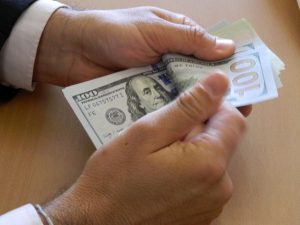